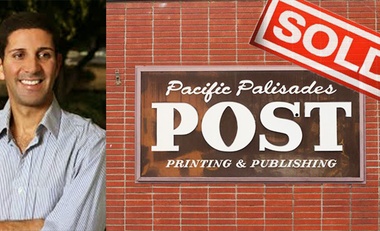 He told the paper’s long-time publisher that he wanted to maintain consistency and that other than financial support, he would not be involving himself in the weekly publication’s day-to-day activities. He told the paper’s readers about the ‘excellent progress’ that has taken place since he took over including improved content and delivery offerings. And he told The L.A. Times, in a gushing front page profile, about his love for newspapers, for the Pacific Palisades and about his “moral obligation” to make sure the Post is delivered every single Thursday.

“My plan is to continue the journalistic excellence the paper has maintained for the last 84 years, delivering vital and entertaining news about our incredible community,” Smolinisky said when he purchased the Post.

But in the past few weeks Smolinisky’s words have been hard to reconcile with his actions and a string of layoffs has left the paper gutted and set the small, affluent town of the Palisades aflutter. Earlier this month the long time editor of the Post, Bill Bruns — after announcing his retirement in August — was abruptly fired, ending an earlier agreement that would have allowed Bruns to serve as editor till December 13. Bruns claims the paper’s new management told him that they “could no longer tolerate my emails that took them to task for various personnel, office and newspaper decisions they made.” Since then a reporter, the sports editor, two lifestyle writers and a restaurant critic have all been let go. The paper’s masthead is down to a skeleton crew.

In February, just days after the L.A. Times article was published, Smolinisky fired the managers of the Post’s circulation and financial departments and reduced the size of the graphics department from three people to one person, according to several sources. Shortly after acquiring the paper Smolinisky shut down the small printing press that existed in the back of the Post’s Via de La Paz offices. Those offices, where the business and editorial teams called home for 62 years, is now padlocked. Two months ago Smolinisky sold the office for $3 million to an ‘all cash buyer,’ according to a broker’s flyer.

“For me it seems like the questions now is, how fast can he kill the paper?” said Roberta Ross Donohue who served as publisher of the Post for 26 years before Smolinisky fired her back in January. Donohue first started working at the Post in 1972 and worked her way up to publisher. “He made a promise when Bill, Alan and I all went to lunch. He said ‘I want you for the next ten years of your life. I am going to buy it and I am going walk away,” she said. “I don’t find him to be a trustworthy person.”

When Smolinisky purchased the Post it seemed like the latest in a nationwide trend of wealthy businessmen stepping into the void of the beleaguered newspaper industry, buying up legacy news publications as either viable business acquisitions or vanity projects. Aaron Kushner bought the Orange County Register, Doug Manchester bought the San Diego Union Tribune, and most recently Amazon founder Jeff Bezos purchased the Washington Post. Granted, the Palisadian-Post, with a circulation of only about 5 thousand print editions a week, is not a hard hitting news publication nor has it ever aspired to be. It has however served as a reliable community paper for the past 84 years recording marriages, births, deaths, soccer games, high school graduations and Fourth of July parades. The paper was also on a bit of roll scoring a string of scoops surrounding a massive real estate deal — potentially involving mega developer Rick Caruso, the man behind the Grove — that would forever transform the three block center of the Palisades village.

“As the owner he had the right to do what he wanted with the paper but I believe he also has an obligation to protect its reputation.” said Bruns. “This is a community institution and has been here since the town started and we covered the town week after week after week. It wasn’t a commodity. It is a treasure and people looked forward to getting it on Thursday.”

The drama surrounding the Post has also stirred a larger criticism in certain Westside circles. Despite its current reputation as one of the most affluent communities in Southern California which is now home to dozens of celebrities, a shrinking but stalwart contingency of long time Palisadians views this episode as part of larger, unsettling trend. “It’s so disgusting what Alan Smolinsky (the new owner) has done to this paper! This paper will be geared to the soulless overpaid young people who have taken over this town! What a shame!” read an email of one local resident that was making the rounds.

Here is what we know about the 33-year old Smolinisky: After graduating from Palisades High and later from the University of Southern California he made his fortune in real estate development, specifically developing luxury student housing complexes around USC and the University of California at Santa Barbara. He told the L.A. Times’ Martha Groves that his goal was to become a billionaire like his “idols” Warren Buffet and Charles Munger. He owns a Ferrari and a Bentley and lives in a mansion in the Huntington neighborhood of the Palisades.

Earlier this month the Post announced that it had hired Frances Sharpe as the paper’s new editor and, according to Bruns, Smolinisky has hired at least a few more replacements. Still, it remains unclear exactly what Smolinisky has planned for the Post. There are rumors circulating that he intends to sell the paper. If he sticks to rebuilding the paper, Smolinisky may have inadvertently set the stage for a Westside newspaper war. According to one source, the Malibu Surf Side News, which recently came under control of new ownership, is eyeing a push southward into the Palisades marketplace.

Said Bruns: “The mystery is why (Smolinisky) felt the need to get rid of a staff that was producing a great community newspaper that everybody loves. We were growing our circulation so we were obviously doing something right. That is one of the baffling things.”