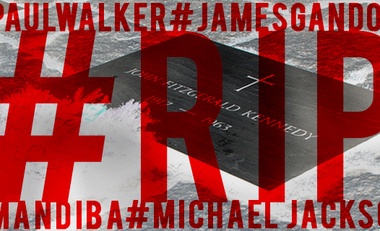 Where were you when you found out that the actor Paul Walker died? What about James Gandolfini? And Brittany Murphy? Do you know and perhaps more importantly, did you care? I know where I was, or at least what I was doing for all of them — looking at a screen — but what I am growing more restless about is the second part of the question, should I care?

I found out that Walker passed away on November 30 through Twitter. I initially thought it was a hoax — because, let’s be honest, how much can you really believe on the Internet these days (I still remember the relief a few years back when news of Harrison Ford dying on a yacht in San Tropez turned out to be a hoax). It seemed too tragically ironic that the star of “The Fast and the Furious” franchise met his end in a fiery crash in a car that was faster than FiOS. Sadly, it was true, and the next few days Walker became the latest case study in how we collectively mourn people that we’ve never met.

My Twitter, Instagram, and Facebook feeds transformed into virtual shrines to the actor, an actor that no one had talked about for years. People posted pictures of the star or, better yet, pictures they had taken with the star. “Rest in peace” or “gone too soon” status updates became ubiquitous. There was even an emoticon or two. Occasionally, a person would recount how they had met Walker once several years ago, or had gone to school with a family member of his or attended a party once with his brother. In typical online fashion it became less about the deceased and more about the individual posting their eulogies.

After the recent string of celebrity deaths that includes Nelson Mandela and Peter O’Toole, it is clear to me that my generation’s relationship with death is out of whack. There is no longer a need for any sort of real connection to the deceased in order to share in or contribute to the grieving process. In the case of celebrity deaths we appear to be mourning the loss of a commodity and not an actual human being.

I failed to join the mournful chorus for Paul Walker because I’d never crushed on him during high school. He wasn’t my type.

Fair enough. But as a ‘millennial’ I wonder, is my generation getting overly excited by celebrity deaths? It has become comically easy to show awareness about a topic, to give the appearance of connectivity without having any actual awareness. And in case you are wondering if it is a generational thing, compare the outpouring of Tweets for the 40-year old Walker to the far more measured eulogies offered to the 81-year old O’Toole.

I posed the question to Meghan O’Rourke, who has written extensively about death and mourning. “The outpouring over celebrities is typically a kind of occasion for private griefs to be rehearsed, a way for us to collectively experience loss – celebrities are to us what Achilles was to the soldiers in the Iliad, as Darian Leader suggested in his book The New Black,” she said. “But in a way celebrity mourning is necessarily virtual, since our relationships with them are virtual. But I don’t think the digital age has profoundly changed our experience of death, so much as it has created venues for mourning (on Facebook, etc) in the immediate days and weeks after a loss.” Agreed.

My first experience with this phenomenon was with the death of Anna Nicole Smith in 2007.  I was a junior in college then, and had been entertained for years by the popular reality show “The Anna Nicole Show.”  Smith was my generation’s first exposure to the celebrity “hot mess,” a precursor to many of the actresses that populate the scene now.  She was depicted as a binge eating, pill popping, drunk ex-stripper. Google search her name (which I don’t suggest doing), and a picture of her deceased body covered in her own vomit pops up.

As a fan, I couldn’t help but find the coverage of her death both degrading and insensitive…but I also couldn’t turn away.  Like a lemming, I needed to participate in the frenzy that surrounded Smith’s death.

The circus that surrounded the 2009 death of Michael Jackson hardly requires further analysis. Pictures of his deceased body — splayed and lifeless on a gurney — can be found easily on the Internet. The trial of his private physician Dr. Conrad Murphy was broadcast live on television.

This brings me to the recent death of Nelson Mandela, who I hesitate to lump in with a number of the aforementioned celebrities. Mandela was far more than a celebrity. He was one of the most influential leaders of the last century. But was the deluge of photos on Instagram and the inspirational quotations on Twitter an authentic way to memorialize Mandela? The #mandela hashtag seemed, at least to me, a bit tawdry. The phenomena of ‘click through’ mourning for a towering statesman like Mandela seemed to border on distasteful.

The barriers of entry for mourning used to be a trip to the cemetery, attending a funeral or the sending of flowers. It is now simply a swipe of your finger and the only requirement is that your obituary should not exceed 140 characters.