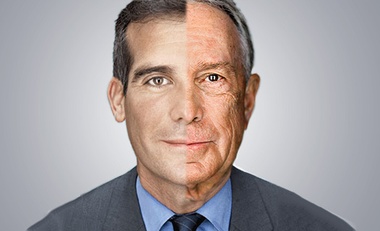 In late August, Los Angeles Mayor Eric Garcetti, barely two months into his first term, sat down with several of the principals of the Creative Artists Agency at their Century City offices. The meeting was short, lasting a little more than 20 minutes, but that was all Garcetti needed to get his message across. He was there to pitch his plans for a citywide “rebranding” effort and wanted to use Hollywood’s most powerful talent agency as a sounding board for his plans, if not more.

Sitting down with the brain trust of CAA — an agency that represents A-list actors such as George Clooney and Brad Pitt as well as corporate brands such as General Motors and Coca Cola — makes complete sense: CAA is arguably the most powerful agency in the town’s most powerful industry, an industry that happens to be in the business of sculpting perceptions.

But there was one name, according to a source present in the meeting, that came up repeatedly — the name of a person who had nothing to do with L.A., its economy, or the agency’s roster of clients: Michael Bloomberg.

“[Garcetti] was saying that he wanted to rebrand L.A. in a similar way that Bloomberg had rebranded New York,” said the source.

As far as their mayoralties go, Bloomberg and Garcetti are like two ships passing. After 12 drama-filled years in office, the 71-year-old Bloomberg will be exiting City Hall at the end of the year, and every major New York press outlet is currently spilling loads of ink evaluating his legacy. Meanwhile, the 43-year-old Garcetti is under a different sort of press scrutiny: The local press is assessing his first 100 days in office.

It is hard to recall any mayor who has cast a larger shadow over the national conversation than Bloomberg, a fact not lost on Garcetti, who has made no secret of his admiration for Bloomberg and his accomplishments. Barely two weeks after his election, Garcetti made a one-day trip to New York City to meet with Bloomberg. “I’m interested in how he structured his office, how he turned around the New York economy, [and] his office of Immigrant Affairs, which predates him, but I am interested in looking at [it],” Garcetti told the Daily News.

The Bloombergian policies Garcetti has stated he wants to emulate are myriad. Like Bloomberg, he does not shy away from large, landscape-altering development projects, evidenced by his support of the Millenium Hollywood development project. Garcetti has pledged to appoint the city’s first technology czar — copying New York City — and has openly applauded Bloomberg’s embrace of big-data solutions and the creation of his geek squad. While Bloomberg is credited with fostering a welcoming environment for New York’s startup industry, Garcetti has made similar overtures to L.A.’s tech community and hopes that L.A.’s Silicon Beach can one day rival New York’s Silicon Alley. Garcetti has also said he would explore creating an L.A. version of the $2 billion Cornell NYC Tech campus on Roosevelt Island. Groundbreaking for that project is expected to occur next year. In fact, Garcetti’s admiration for Bloomberg almost became a liability during the mayoral election when his opponent Wendy Greuel employed it in a campaign attack. “I want L.A. to be the best L.A. that we can be — not a new Manhattan, as my opponent wants,” Greuel said.

But Garcetti’s rebranding efforts will differ from Bloomberg’s by dint of their respective cities and the situations they inherited.

“You have to remember that when Bloomberg took office in 2001, it was four months after 9/11. The fires at the World Trade Center were still burning,” said Mitchell Moss, director of the Rudin Center for Transportation Policy and Management and Henry Hart Rice Professor of Urban Policy and Planning at New York University. “So Bloomberg’s first mission was to energize New Yorkers and communicate to the world that New York was on the road to recovery. The essential part was conveying the energy and vitality of the city.”

So far, Garcetti’s rebranding effort — like his governing style — has been slow, methodical, and understated. He commissioned the artist Catherine Opie to create a series of images to welcome people when they arrive at LAX. He has been lauded for embracing social media platforms like Twitter and for engaging with constituents both physically and virtually. Just this week he was a surprise guest keyboardist at the Moby concert (Garcetti is a jazz pianist) and was seen palling around with Magic Johnson at Dodger Stadium when the Dodgers closed out the National League divisional series against the Atlanta Braves.

But some political observers on both coasts are wary of where Garcetti may take his branding project and how much he should allow the lessons of Bloomberg to influence him (Garcetti’s office declined to comment for this article).

“There are perils for Eric using Bloomberg as a blueprint,” said Fernando Guerra, director of the Thomas and Dorothy Leavey Center for the Study of Los Angeles at Loyola Marymount University. Guerra sees two problems. First, the New York City charter gives its mayor more sweeping powers than the mayor of L.A. has. For example, the mayor of New York City appoints the chancellor of New York City’s public school as well as the city’s police commissioner. The mayor of L.A. is not empowered to do either of those things. The second problem is that Bloomberg’s personal wealth — this year Forbes estimated his net worth at around $31 billion — provided him with a flexibility that almost no other big-city mayor can replicate. “Bloomberg was autonomous in ways that Eric could never be. Eric is of a different generation. He understands contemporary culture to a greater degree than any big-city mayor ever has. He is a hipster. The dude is cool,” said Guerra.

But something else happened that should give Garcetti pause in his rush to be like Mike: the election of Bill de Blasio in New York City’s Democratic primary. De Blasio, a former staffer in the Clinton administration and city councilor from the liberal neighborhood of Park Slope, Brooklyn, ran the most overt anti-Bloomberg campaign of any of the five candidates. After languishing in the polls in a distant fourth place for most of the race, de Blasio surged into the lead in the waning weeks of the election, pulling off one of the more stunning political upsets in recent memory.

“We are all a little shell-shocked and baffled by it. We wanted someone that was going to be a consensus builder and de Blasio found some consensus, which is the exact opposite of the Bloomberg method,” said Choire Sicha, who is the editor of The Awl and considered by many to be the conscience of New York’s creative class. Sicha recently published a novel, A Very Recent History, a tale loosely based on the lives of young New Yorkers in 2009, in which a billionaire mayor plays a prominent role. He also penned a column for New York magazine with the subheadline: “If New York is better than ever — and it is! It is! — why does it kind of suck?”

Some experts contend that voters never forgave Bloomberg for extending the city’s term-limits law so he could run for a third mayoral term in 2009. Others say that de Blasio’s mentioning the NYPD’s “Stop and Frisk” law and deploying his mixed-race son in his campaign ads was a stroke of political brilliance. According to Sicha, the most compelling reason for de Blasio’s emergence was the success of his “Tale of Two Cities” platform and his ability to express empathy for those New Yorkers who never fully recovered from the Great Recession of 2008.

“It was a very personal vote; it was almost an aspirational vote in identifying with [de Blasio] by saying, ‘He is one of us.’ He had his victory party at the Gowanus Canal (in Brooklyn) at a shabby nightclub, which is so night-and-day to Bloomberg. So it was kind of a ‘fuck you’ to Bloomberg voters,” he said.

“It seems pretty clear that (Bloomberg) believes creating New York as a luxury product is a really valuable model for economic development and the branding he did was associated with that,” said Miriam Greenberg, associate professor of sociology, director of the Urban Studies Research Cluster at the University of California, Santa Cruz, and the author of Branding New York: How a City in Crisis Was Sold to the World. Greenberg says when it came to certain social programs like public health, affordable housing, and the creation of green space Bloomberg was like Franklin Delano Roosevel, but when it came to economic issues he was all Adam Smith. “He sees nothing wrong with a winner-take-all economy,” she said.

NYU’s Moss, a staunch defender of Bloomberg, says the charge that Bloomberg was responsible for the rising inequality in New York City is unfair. “Inequality started under the Bush years, and was aggravated by the recovery,” said Moss. “Inequality starts in the nation’s capital. During the financial recovery, the income of the middle class saw no increase, but that has nothing to do with to do with the mayor of L.A. or New York.”

Although both mayors are Jewish, their personal similarities pretty much end there. Garcetti is a Democrat, while Bloomberg is an independent who previously identified as a Republican. Bloomberg is a billionaire who entered public service after decades of building his company in the private sector. Garcetti has been in public service almost all his professional life. Bloomberg is famously standoffish, buttoned up and prone to petulance. Garcetti is even keeled and has been called “nice,” possibly too nice, to be an effective mayor.

Last week, news broke that Garcetti had hired the high-profile executive-search firm Heidrick & Struggles to aid in the city’s search for its next deputy mayor for economic development. The job description, according to the L.A. Weekly, calls for an individual who is “transformational and highly respected, mission-driven”; someone who is a “progressive, accomplished business leader”; and someone who can “thrive in [a] high-profile, public position with significant public and political scrutiny.”

Sounds like Bloomberg would be a perfect match for the job.