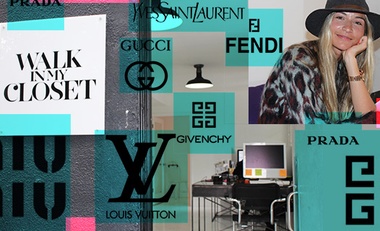 Walk In My Closet’s Ambre Dahan
Photo by Blanca Azcarraga

Stepping into the West Hollywood flagship office of the recently launched Walk in my Closet website, the operation appears as efficient as it is très chic.

Racks of designer dresses are being evaluated and priced. Neatly arranged shoes await their photo opp. White closets are teeming with items that have already been merchandized for the digital marketplace– safekeeping them until they reach their future owners.

Part designer consignment retail shop, part new media for the fashion curious, the site brings together vetted fashionistas and those — like myself — whose style edification begs a few peaks into their digital closets.

Standing up from her desk to unveil her impeccable style — a blend of modish Parisian and California cool — site co-founder Ambre Dahan describes how the idea of Walk in My Closet took shape nearly two years ago, inspired by a ritual of exchanging favorite “looks” with her friend (and the site’s other co-founder) Amandine Rohmer.

“Everything is about sharing today. It’s part of the era,” says Dahan, a 33-year-old fashion entrepreneur who has both a business and a law degree behind her. “But there’s also so much history and attachment behind things in your closet — like what you wore when you met your husband or outfits that bring about good memories.”

And consequently, the process of documenting your closet also unveils those items you no longer need, says Dahan. The jacket that doesn’t fit quite right or those heels you’ve clung to because they cost too much to justify parting ways with despite not knowing why you bought them in the first place (I may or may not be speaking from personal experience).

For those items, the site offers its signature “concierge” service, making the process of up-cycling your garments simpler than eBay and with a lot more luxe.

According to First Research the used merchandise industry in the United States includes about 18 thousand stores with combined annual revenue of about $13 billion. But in more fashion-conscious locales like Los Angeles and New York there is a growing niche market for luxury brand items. The challenge for entrepreneurs like Dahan and Rohmer is making the transaction — photographing, uploading, selling and exchanging payment — as ‘frictionless’ for consumers as possible.

Dahan describes how hopeful sellers can simply email the site about the designer (gently used and in good condition) item that they wish to sell. Walk in My Closet will then send the shipping label, list the item and award the seller the earnings. Concierge treatment requires 35 percent commission. Or, users can list the item on  for 25 percent.

The Instagram part involves uploading pictures of clothes from your actual closet and cataloguing them in your digital closet. The iPhone app for seamless uploading was released this week. As Dahan says, it’s an excellent opportunity to survey what you already have in your closet in order to “round out” your collection. It’s not about quantity, she explains; rather, it’s about quality and learning to evaluate which pieces you’ll get the most use out of.

“People sit on a lot of money in their closets,” she says. “It’s nice to indulge in something new and not clutter with a bunch of things you don’t really need.”

From there, users can create “wish lists” of items that will compliment the round-out process. Also, there’s the option of creating a mood board (á la Pinterest) and a profile about yourself so those who want to follow your closet and join your “clique” can get to know you.

Those who already have their closets on display include some of the world’s most fashion-forward insiders including New York magazine editors, Paris fashion designers, L.A. stylists and even Joe Dahan (founder of Joe’s Jeans and Ambre’s husband).

But don’t let that intimidate you. Dahan wants everyone to upload their closets to the site. “Yes, there’s a sense of ‘fashion insider’ but we want to keep it democratic,” she says. All that’s required to join is an email address.

And to prove that point, Dahan even asked me to join. And yes, I had to Google almost every designer she had mentioned when I got home.